Today for the first time ever Oesterreichische Kontrollbank AG (OeKB) is going live with a blockchain technology based application. The new technology is used for data notarization for reports from today's government bond auction onwards. This notarization service provides a trail to verify the authenticity of data, thereby ensuring the greatest possible degree of data security. Notarization is a new additional support element for the auction process. Blockchain technology is used in this particular case as an additional layer of security.

In general blockchain technology has great potential for increasing the efficiency and quality management of banking processes. Numerous applications are emerging, especially in the fields of the digital economy and public administration. "We regard the innovative form of blockchain-based data notarization as a logical technological advance in times of digitalization. We are delighted to be able to offer our customers this new blockchain service," says Angelika Sommer-Hemetsberger, the OeKB Board Member responsible for IT and Capital Market Services.

"We have been actively engaged with the blockchain topic for some time, and have already evaluated several prototypes. The launch of live blockchain operation is a positive step forward. Our aim is to continue testing blockchain technology over the course of 2019, and assess the possibility of rolling it out to other service areas of OeKB," explains Ms Sommer-Hemetsberger.

Blockchain-based data notarization involves using an encryption method for documents to derive a unique electronic fingerprint, known as the hash. This hash is unambiguously assignable to the original document, but conversely does not allow conclusions to specific data content. "This means the original document can be stored securely in OeKB’s computing centres, and the authenticity of the document can be guaranteed. The blockchain implementation enables OeKB to integrate a further level of security based on blockchain in addition to the already existing high standards of security," explains Angelika Sommer-Hemetsberger.

The new technology has been tested extensively within OeKB, and went live for the first time today, 2 October 2018, for the government bond auction on behalf of the Austrian Treasury (OeBFA). This enables OeKB to guarentee the integrity of sensitive auction data, which is stored only locally, and cannot be accessed or manipulated (see diagram). 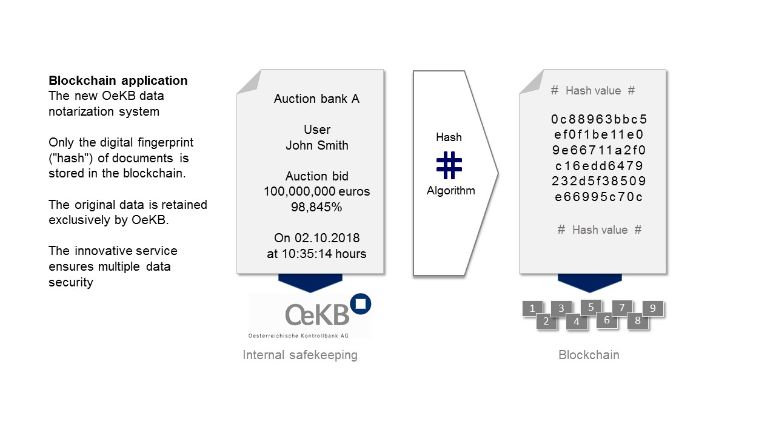 "This additional layer of security helps to underpin confidence and trust in the auction process, and further strengthens the good standing of Austria on the capital market. That could indirectly also help to minimize  funding costs," says Markus Stix, managing director of OeBFA. It introduces an additional layer in the data management quality assurance system, providing further transparency in digital processes. "The Republic of Austria has a long tradition with regards to innovative capital market solutions: in 2012 Austria was the first sovereign worldwide to introduce dual-syndications for new government bond issues, and in 2017 the longest government bond in the world was issued in the form of a 100-year government bond. We are pleased to take on another pioneering role now together with OeKB, this time with regard to fintech," adds Markus Stix with satisfaction.

How a government bond auction works

OeKB acts on behalf of OeBFA in conducting the auction process for government bonds of the Republic of Austria. Since 1998 the entire auction procedure has been carried out electronically by means of ADAS (Austrian Direct Auction System), developed and operated by OeKB. During the bidding phase the auction participants submit their bids via ADAS. Bids can be adjusted until the deadline is reached. Auctions as an issuance technique are commonly used by governments worldwide as they enable a fast evaluation of the most favourable financing conditions. Competition is guaranteed with secret bidding by numerous auction participants. Established auction rules ensure fast and transparent allocation of the most competitive bids, whilst maintaining the highest security standards. The new blockchain-based notarization service now adds an additional layer of security.

The results of today's Austrian government bond auction can be viewed here:
https://www.oebfa.at/en/funding/emissionskalender.html

OeKB Group’s companies with over 400 employees provide essential services for the Austrian export industry and capital market, serve the energy market and are involved in Austrian development financing. Their activities are of clear economic benefit, strengthen Austria as a business location and further the competitiveness of the Austrian economy. OeKB group conducts its business in a cross-sector, sustainable and responsible way.

The Austrian Treasury (OeBFA) is the debt management office of the Republic of Austria and acts in the name and for the account of the sovereign. Its responsibilities include issuing Austrian government debt and managing the federal government debt portfolio. In addition the Austrian Treasury may carry out funding for provincial states and other entities of the Federation. It was established in 1993 and is wholly owned by the Republic of Austria.